This is also me.

I never considered myself anything of an oil painting, to borrow an old phrase. In fact, if I was a character in an Agatha Christie novel I’d be considered “homely” rather than “comely”. And that’s okay. That’s me.

My six year old son, however, believes differently. He says to me yesterday “Mummy you’re SO pretty. Every single day I see how pretty you are”. The child is six. He knows how to lie (“No, Mummy, it wasn’t me who spilled all that water out of the bath. I’m sure it was Daddy”) but he has no idea how to lie well, so I have no choice to believe that what he says is – at least in his mind – true.

My son knows well the value of words and how good they can make you feel. This is why he says these things to me. He sat on my knee at the dinner table the other night while I read his school report out loud. It was his first “proper” report, with all the details and everything. It was wonderful, he’s a wonderful kid. But oh how I could feel the pride surge through that little body as I read words like “excellent”, “very good skills”, “well above the expected level”. He wriggled with joy, his smile about to split his face fully in two. I thought to myself that the next time he feels down I’ll have to read his school report to him again 🙂

Made me remember though just how powerful words can be, for good as well as for bad. I wrote in Monday’s post about a parcel of criticism that was delivered to me when I was young, and over the past few days I’ve realised what a forest of mighty oak trees grew from the little acorns in that parcel, from the words that I had no choice but to believe about myself. It feels good to look at those trees and know they are not part of me, and bulldoze them down. It makes me hyper-aware, too, of the language I’m speaking over my kids, especially when I’m mad at them.

My hair isn’t as red as the “me” in the painting, but my cheeks are. And yes, I do wear as dippy a face as that when I’m sucking the life out of the smell of roses. I’ve been teased about both of those things over the years, and thrown words that would try to mold me into somebody else’s idea of who I should be. Words don’t go easily, but I can get rid of them, and the thing I find is that when those mighty oak trees finally fall the ground where they were is rich and fertile for the me that I was all along underneath to grow.

Once upon a time, a very long time ago when my first bras were still quite new and my teeth were newly straightened, I was given a big parcel of words. Most of them were quite nasty, in a neatly clipped, ordered kind of way, and the words “ungrateful” and “selfish” appeared quite a few times. They were (for me at the time, because I was probably very selfish and quite ungrateful) completely out of the blue. I had no idea such a parcel of words existed, and I had no idea that they applied to me.

These words were delivered, one by one, on a drive that took a little longer than an hour, and finished in an angry silence and the last, dreaded words “So you should be crying.”

I had no idea I was that bad a person. Nobody had ever told me before. I’d thought I was okay. After the drive the parcel-deliverer delivered me to my mother, and while I sat crying on the bus he unpacked the parcel again for her in the same, neatly clipped, ordered way, and I sat watching her face turn from warm to cold and angry as she took the parcel from him and unpacked those words over me again, one by one in the hour it took for the bus to get us home.

Well Megan, So You Should Be Crying.

By the time the bus got to our stop and we walked home I was exhausted and all cried out, and, at my mother’s behest, I called the parcel-deliverer, apologized, and was forgiven. I never really forgot those words though. I kept them close to my chest, because the one thing that I knew was that I never ever wanted to do that again, or have words plastered to me like that again. I used the parcel as a shield, if you like, to filter my interactions with people, to ensure that I never did anything again that would cause people to say So You Should Be Crying, or plaster me again with words like Selfish or Ungrateful.

I realized, as I grew up, the huge amount of stress that the parcel-deliverer must have been under at that time, exacerbated by the presence of an extra, talkative thirteen year old in the house, and magnified again by a bus that didn’t come and having to make a two-hour round trip to deliver said child back to her mother. It can’t have been easy for him. Every time I pictured that car ride, or the waiting at the bus stop, I forgave him again, or tried to, anyway.

Some things don’t go though, no matter how hard you forgive people. Some memories not only linger, but come up with alarming frequency sometimes. This one has been. I’ve learned a lesson now that I’ll hopefully remember for the future: when memories are thrown into your face unbidden and against your will like that one has been for me, maybe it’s because it’s trying to teach you something. Maybe it’s time to take out the parcel and unpack it and see what it says.

I did that. Last night. I opened the parcel I’ve been carrying around for all these years and looked at those words as an adult for the first time. I saw the tired, stressed-out-of-his-brain man who delivered them, and I realized for the first time that that parcel that I’ve been clutching so close to my chest for all these years wasn’t really mine to begin with. I didn’t need those words. Maybe half a dozen, perhaps, but not a whole hour’s worth in a parcel. They were his words, his feelings of the time that got dumped on me. I didn’t need to carry them forever.

I just got someone else’s mail. 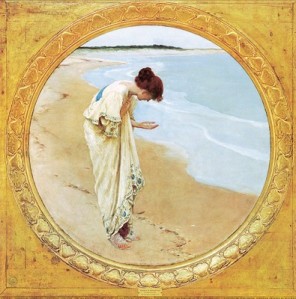 Well, it’s a painting of me from about a hundred years before I was born, which probably makes me over a hundred years old, and if you click on my Gravatar picture you’ll see just how well I’ve aged, and why I should now be a candidate for one of those Facebook side-bar advertisements, see-this-130-year-old-woman-who-looks-like-a-regular-person…
Oh…whatever.

The reason it is me is because it hangs in our bathroom, and because most of the pictures on our walls are family pictures, for my kids the connection is obvious. And yes, it looks like me. I’ve been fielding questions about this picture since my eldest was old enough to talk:

Mummy why are you wearing a table cloth in that picture? What did you pick up? Where is the pearl now, do we still have it? Why did you wear shoes on the beach? Did the sand get on your feet through the gaps?

For a long time I patiently tried to explain that it’s not me, that it’s a painting of a lady who looks like me, and that we just liked the picture so we hung it in our bathroom. The older two kids get it by now, but the youngest…he’s a different sort all together.

My three-year-old believes exactly what he wants to believe, and woe betide anyone who tries to dissuade him. He doesn’t listen, and he keeps asking until he gets the answers he wants. I’ve given up trying to tell him the truth in some cases, and in regards to the picture I tell him what he wants to hear. I wore a tablecloth that day because I couldn’t find my bathers and I didn’t want to get sunburned. Yes, the sand was hot so I kept my sandals on, and I didn’t mind too much if it stuck to my feet. And yes, I kept the pearl, and it’s the same pearl that’s on a necklace in my jewelry box.

It’s easier. And shorter. He’ll learn one day, I hope.

It makes me wonder though, how much stuff in life have I filtered through my own perceptions? What have I believed because it was what I wanted to believe? What have I disregarded because I’d already made up my mind? We all do it, but It’s still a scary thought. Sometimes we need to sift through the evidence and the memories and open our minds to what may be a different kind of truth, one vastly different to what we’ve understood before. It’s a brave place to be.

My son came in to my study just now with his toy singing chicken and asked me who gave it to him. I told him the truth, we bought it at Ross (a little historic town) in January. He tells me “I like Ross. He’s my friend!”

Great, son. I’m glad Ross is your friend. Maybe we’ll take him with us next time I wear my tablecloth to the beach.