Can I tell you a little story? It’s just a little one, and it’s not about carpet, although it is about being poor, and about the way we see ourselves.

One day, when my big nine-year-old girl was still a little four-year-old-girl in Kindergarten, I  met a man while walking home. It was a Friday, that I remember, because I was on my own  after dropping her at school, and he had a little girl riding on top of his shoulders. She was also at Kindergarten, although in the other class from my daughter. They looked like a nice family, and I found myself wishing strangely that we could be friends, or that our girls could be friends.

That’s not what this story is about though.

The man was a friendly man, and we got in step and soon we started talking. I don’t remember what about so much, or about how the conversation led to the ending it did. It was probably about renovating, because he’d asked me whether I lived around here, and I told him I lived in the house around the corner with the peeling pink paint. I felt bad about that paint. I don’t remember what else we said, but I do remember the feeling though that my little girl was now in Kinder, and that she’d bring her friends home, and I felt ashamed for her that she didn’t have the perfectly painted house-and-garden bedroom that I’d always dreamed for her, or the lovely romp-able back lawn. I felt, that year, that I’d let her down, or in some large cosmic sense, I’d let her future self down by not giving her the beautiful start in life I’d always dreamed for her, my first born, my baby girl.

What the man said to me though, after we’d stopped outside his house, a big old shabby-looking place that I’d often wondered about, was this: “We’ve done a lot to our house, and it’s taken years to get around to some things. I think it’s good though. I think it’s good for the girls to experience the process, and to understand that they can’t just have things done all at once.”

I nodded, and smiled. I didn’t once let on how his words changed my life, and then I walked home.

Five years later, and his little girl and mine are now fast friends. I’ve been to their house numerous times to pick her up from playdates, and seen that inside that shabby, crusty exterior is something truly palatial by my standards. They’ve done most of it themselves, and are still doing it. The last few times I’ve been there the dad has been up on a ladder plastering the ceiling of one of the bedrooms, or laying new floorboards, while the girls play Barbies or craft on the mat in the living room. I love their house I love the amazing journey they’ve had, and the huge amount of effort they’ve done to get it to the standard that it’s at. But what I love most of all is this: it reminds me constantly that it’s not the destination that matters, it’s the journey.

I have not let my daughter down by not providing her the most beautiful house and bedroom to start her life in. I’ve given her the gift of experiencing a journey.

When we were younger and only very new Christians, my other half and I used to go to Youth With A Mission meetings with a whole bunch of our friends. We liked them. The music was great, and there were always different people telling interesting stories about interesting things. After a while though a lot of the stories started sounding the same. Patterns started forming.

Youth With A Mission are a…you guessed it…Missions organization. They take…you guessed it…youth…out on…oh yes…Missions trips to various places around the world. The first pattern I noticed was this: that the trip was going to cost the speaker so-and-so thousand dollars, and all the speaker had was $13.70, two McDonald’s vouchers and a sleeping bag, and he needed the money by last Tuesday midnight. The speaker and his family had all prayed and believed and trusted in God, and lo and behold, at 11.58pm there was a knock on the door and a complete stranger with so-and-so thousand, or a sudden car sale, or a spontaneous idea for a cupcake competition, or something. There was always the Something.

The next pattern I noticed was this: the speaker had always had a lifelong aversion to one particular place. Hated Canadians with a passion (allergic to ice hockey?), or had a crazy distrust of Russians, or Japanese fisherman, or something. And that, Canada, Russia, Japan…wherever…was always the place that God had called the speaker to go to.

There was a third pattern too. Now that the speaker had the money (miraculously) and had amazingly dealt with all his previous misgivings about said destination and was now in love with the place and its people, Something Happened when he was over there.

Something big and life-changing. Something that, because he was away from all the trappings of familiarity and routine and all the things he took for granted, God was suddenly able to deal with. So not only is there the financial miracle and the complete change-of-heart, but there’s this lovely heart-warming ending where he’s suddenly reconciled to his father, or understands for the first time some deep place inside him, or has made peace with a deep and awful trauma from years before.

Well. And here I am. We’ve had our financial “miracle” already. And I really shouldn’t mention the fact that for many years I was very negative about America…particularly California (ouch. I’m sorry. I said I wouldn’t mention it!). So here we are, right on track for #3.

I know it’s going to happen. I knew two years ago, when I first felt…whatever you’d like to refer to it as…the call of God, perhaps…the nudge to go to the US. I knew it was going to come down to this. I’ve been trying to avoid it…or at least make sure I deal with it ahead of time. But here we are.

Does that suck, I hear you ask? Why, yes it does. Sucks like a Dyson with a dog-vacuuming attachment. 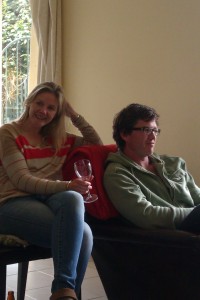 Yes, I’m laughing at myself. And I’m serious, all at the same time. I’m laughing at myself for being so serious. I’m sure it will happen. Although, knowing me, I’m stressing about nothing, and it’ll be more like a splinter removal than giving birth. I’ll still stress about it though. I’m weird like that. And I know that if I was ten years’ younger I’d be even-more-convinced of my rightness, and stressing enormously. I get the feeling from my extremely-wisest friend, too, that if I was ten years older I wouldn’t be worried about it at all. But I’m me. And…I wrote this last night, and when I got up this morning there was an email from the wonderful Wanderer’s blog (I love this woman’s writing), and SHE had a link to this, which kind of confirms both a) I’m right and b) it’s going to be okay. It really is.