I believe in miracles.

(Hi there! Yes, it’s been about a billion years since I’ve written anything here. A big shout out to everyone still hanging in there with me and reading this, thank you! I said last time–I think–I was going a bit quiet because I needed to finish the rewrites on my novel, and I wrote “the end” about an hour ago now, so maybe it’s time. Anyway, hello!)

I’ve not ever had a problem with faith, or with waiting in ridiculous hope for things that seem impossible. I have a gift, and that gift is believing in impossible things.

But even my faith has been tested of late. Not in an I-don’t-know-what-I-think-about-God-any-more kind of way, but in that getting-older sense of life isn’t infinite, not here, and sometimes dreams do have to die, and sometimes people do have to die, and that’s the way of it really, even though we spend our childhoods believing in the miraculous infiniteness of our own selves, our own potential, our own existence.

We grow old. We grow up.

Sometimes we don’t see the things we’ve believed in. Sometimes prayers don’t get answered. And sometimes the answer is “no”. Sometimes it’s “wait”, but the waiting is endless.

Don’t get me wrong, the four impossible things I’ve believed before breakfast aren’t life and death matters, no matter how much they break my heart. I am fine, we are fine, we are all fine. So many of my friends aren’t fine though, not right now, and this post is for them, to say only one thing–even if I am going about it in a long and round-about way–to say that I Believe In Miracles.

I said a prayer the other night. Don’t get me wrong, I do do this praying thing fairly regularly, but this one the other night, lying, for some reason, on my older son’s bottom bunk, was different. It wasn’t at all faith-filled or hopeful, it was just plain honest. Dear God. This is my impossible situation. It breaks my heart. I can’t ever see any way of it changing. And my friends with the broken hearts and the broken lives who need miracles too? Remember them? Please help us all. Amen.

And then, the next day, the first little miracle happened.

I won’t tell you about it, and even if I did explain the whole situation and the heartbreak and the hopelessness you probably wouldn’t understand it, not like I do, so I won’t try here. But what happened was a miracle, all the same, and as unexpected and as hope-filled as any miracle can be.

There’s this story in the Bible, in the Old Testament, where there was this phenomenal drought, and it hadn’t rained in just about forever, and this prophet guy (probably Elijah, but it could have been his buddy Elisha) prayed for rain. He prayed and he prayed, and then after some kind of eternity he saw this tiniest, teeniest little cloud on the horizon, and he legs it as fast as he can back to…oh, whoever it was…and he says this, this most important thing ever: “RUN! RUUUUUUN!!!! BECAUSE THE RAIN IS GOING TO OVERTAKE YOU!”

It makes me cry, that bit. Because it did.

I’m praying for a number of friends today, all needing miracles in a rain that overtakes them. I’ve seen the itty-bitty raincloud, and right now I’m filled with hope.

I believe in miracles. I believe in the power of hope, and in impossible things before breakfast. And today, if you need something impossible in the face of doubt, I will believe for a miracle for you, too. 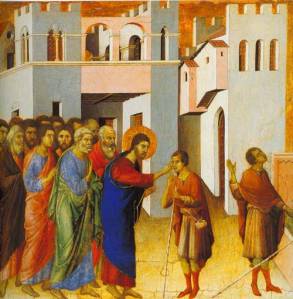 Ever thought you’d like to rewrite the Bible? I have. Not in the weird, form-my-own-religion sense, but, you know, just make God fit…well, fit ME better.

Most of it I like. Most of the time I’m happy knowing there’s stuff I don’t understand, and I’m okay with that. There’s a safety in knowing that I don’t need to know everything, but that I know someone who does, and there’s trust like nothing else on earth when you can just throw your hands in the air (yeah yeah like you just don’t care) and say a big fat What EVER.

Here’s the bit I don’t like though. Here’s the bit I’d borrow the Tardis and go back and slap Jesus in the face for (oh really, Megan?). It’s the bit where Jesus heals the eyes of a man who was blind from birth, and someone (probably his disciples – I love those guys) asked him “Hey how come that guy was born blind? Was it something his parents did wrong or something?” and Jesus said “Nup, it was just so God could get all the credit.”

And I don’t think the guy who was born blind would have been terribly happy with the answer either. Sometimes it’s easier to blame someone than to say “well, stuff just happens”.

I know this, because once upon a time stuff just happened to me. Some super-wise lady once said to me “it’s not your fault, you know. Don’t take it personally. You were just at the wrong place at the wrong time”.

The thing is though, the thing with stuff happening, or with being born blind, is that you get used to it, and you accept it as normal, and part of you, and one of those things you just have to live with, and it’s okay, because even though you’re limping you’re still walking, right? And it’s all good, fine, normal even, until some bloke, some God, comes along and starts fixing things, and then you realize how broken you really were, and after the Grateful and the Shocked you end up with this strange niggling emotion of “well how come you didn’t do it sooner?”

There aren’t any answers, except I guess to slap yourself around the face a bit and telling yourself to be grateful. Because in the end, that’s all we have. And to make sure that the next time we see a man born blind, or some chick who’s limping through life because once Something Happened we put our arms around them and tell them “it’s not your fault, you know”, and remind them that we CAN’T rewrite the Bible, but that there is a One Day, and one day their miracle will come, too.

Do you ever hear voices in your head? People don’t talk about this much. Well, I have a friend that talks about it a fair bit, but she’s on heaps of antipsychotic medication and she runs a support group for people who hear voices that tell them they’re terrible and they need to kill themselves, which I think is positively awful and I’m so glad there’s drugs for that because I love my friend very much and think that HER voices are definitely WRONG.

This, however, is not what I’m talking about.

When I was a kid some people thought I was a bit loopy because I talked to myself all the time. Not like Burger King man in Susie Finkbeiner’s fabulous post the other day (that’s just weird, that is), I never did it like there was someone there next to me to talk to, more like I crawled up inside my head and my memory chatted with the people I imagined there, and sometimes those words leaked out my mouth as well (there weren’t that many people around to talk to when I was younger).

But that’s not what I’m talking about either. And I’m not meaning those strings of words that our thoughts take now that we’re adults and we’re so used to thinking in conversations sometimes our consciousness does it too…in the sense of “Megan you really should put the washing on the line before you go out this morning”. That’s my thinking coming out in conversational thoughts. Gosh our heads are complicated places.

I’m talking about something different. I don’t know if you’ve ever experienced this. I know I’m not the only one, I have lots of friends who describe the same experience, but we’re friends, and we’re similar in many ways. I don’t know how universal it is.

Maybe it’s just because we listen, or we’ve learned to sort out what’s what in this messy environment known as our heads, or maybe because most of us have young children and crazy lives that we’re used to sorting through the mess really quickly and figuring out what’s what.

I call it the voice of God. Do you ever get that? Do you believe in a God in Heaven who talks to people? I’ll explain a bit better, and see if it translates to you.

I was hanging the clothes on the line one day (yes, probably because my stream-of-consciousness reminded me to do so!) and I was praying, because I DO believe in a God that talks to people, and listens, and because I’d rather talk to a God out there than imaginary people I have to crawl inside my head to find, and I was telling God (or, if you prefer, I was telling the wet washing) all about our financial difficulties, about how I had this crazy dream to go to America, but there was not much money in the bank, not much money coming in and a helluva lot of bills piling up and this stupid mortgage that didn’t change from week to week and sucked us dry. I’m grateful for my house and that we are buying it, but…having no money to buy socks that don’t have more-than-one hole each is hard, and especially hard when it continues for long periods of time.

But that was when I heard it; the voice of God. Or the washing (but I’m not on antipsychotic medication, nor do I think I need to be, so I don’t believe it was that), and it said this:

“I’m going to pay your mortgage off in three years”.

I was stunned into believing, even though there was no way I could see how it would happen. My stream-of-consciousness doesn’t say things like that to me. Neither does my washing. It made me happy, not in a socks-without-more-than-one-hole kind of happy, but a deep, resting, Heaven-touched happy. Do you know what I mean? Does that happen to you?

I wish I’d written down the date that day. I told my husband. It was, I think, a bit under two years ago. And yesterday we saw the tree felled for the building of the new driveway that will not only expand the size of our land, but also has the potential to pay off the rest of our mortgage within a year.

I believe in miracles. I believe in a God who tells me crazy, CRAZY things, and that those crazy dreams can actually come true. 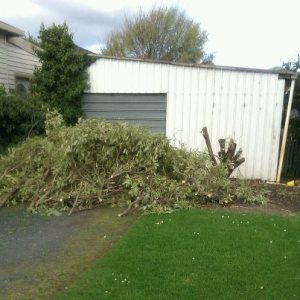