It’s been quite a week. I never thought I’d be saying this, but I’m really glad it’s Monday today. A chance for new, for settled, for picking up where we left off before the new kitchen and the missing cat, and a slice of normalcy (or as normal as normalcy can go on the first day of mid-winter school holidays).

So the cat is back, the kitchen is pretty much done (still some painting and some new blinds to go, but that’s neither here nor there, and both are staying firmly over THERE for a little while thank you very much!). Yesterday afternoon, thanks to my fabulous in-laws, we finally got the old fridge, freezer and ever-so-slightly-falling-apart old flatpack pantry out of the house, and therefore we’re now rediscovering the lounge room under all the excess kitchen stuff. It’s nice. Hey, there’s carpet back there. When did that happen?

Want to see some pictures? You bet I want to show them to you! 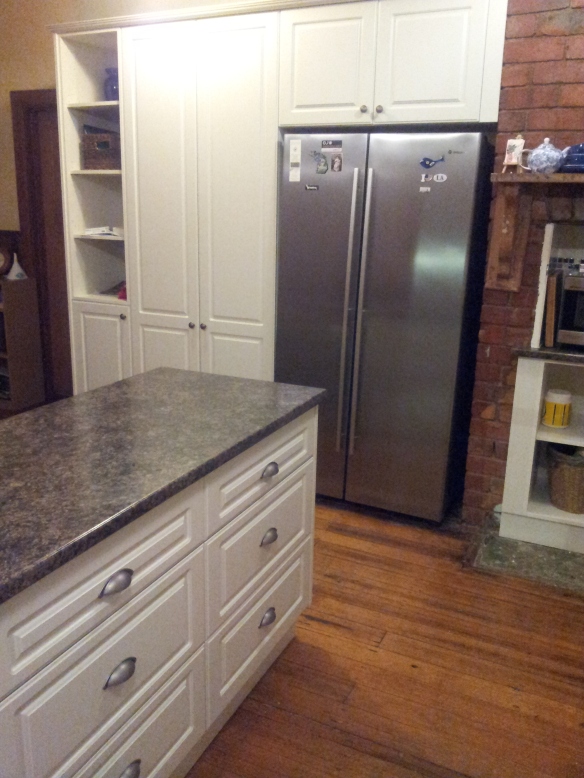 OMG there are shelves, drawers, and cupboards for EVERYTHING! 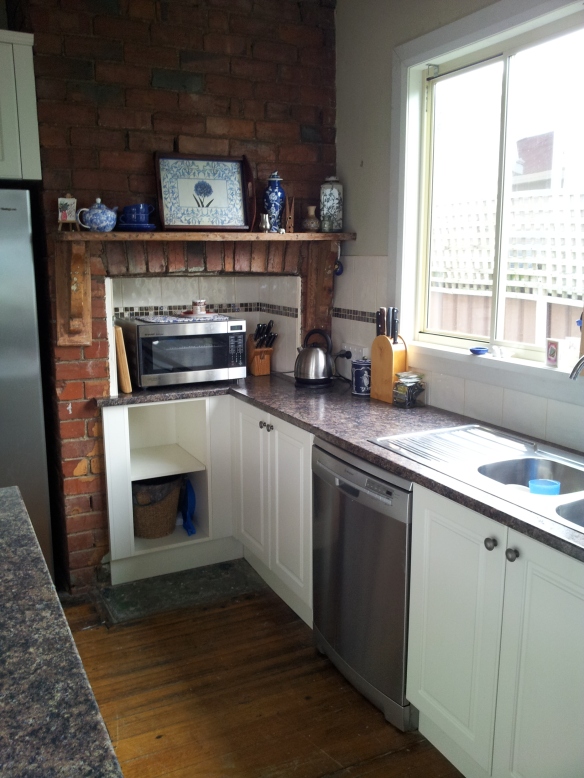 I love this fireplace. It used to have the old oven in it, and a bunch of useless space around it. 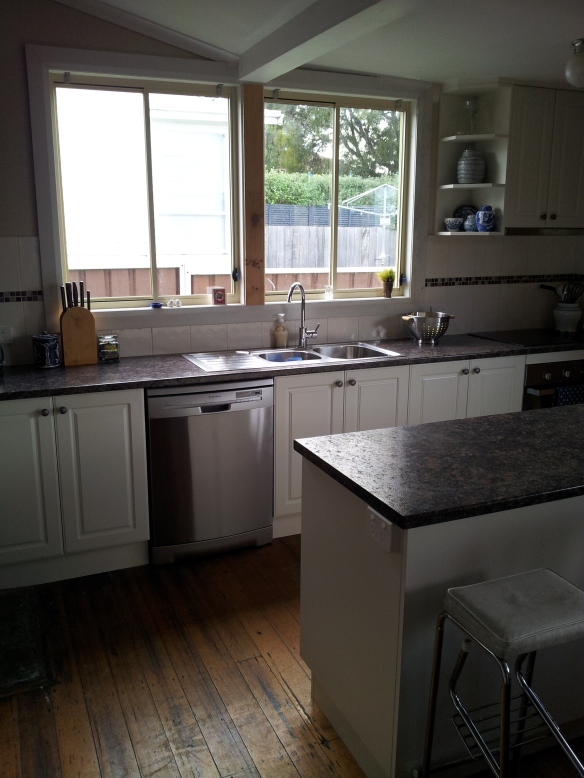 It has a dishwasher!! And actually IN the kitchen!! Seriously folks, if yours is in the laundry (like mine has been for years) you should put it in the kitchen. Man those things can change a woman’s life!

So there you go. I love it. Feels like there’s so much space, even though the cabinetry takes up more room than the old stuff. And it’s so light, and there’s so much storage! And yes, before you ask, it IS still that clean. Who knew that house work was easy once you had a kitchen where everything had a place? (Even when that place is on the shelf in the bathroom, or under the bed. I know. I need to have a garage sale. )

You know what though? They finished it on Wednesday, packed up all their tools and moved out and let me put all my things back in place, and I sat down on my little white stool at the island bench and I thought…

All that money, all that time. All that stress. All that but-I-loved-it-while-they-were-building-it. I didn’t like it.

Well, not so much that I didn’t like it. They’d grouted the tiles in an off-white grout, presumably designed to blend in with the off-white tiles and the off-white cupboards. I hated that grout. I hated the way it blended with the colour of the tiles, especially the feature tiles, and made it look just like something out of a Home and Garden spread…from 1983.

Nothing wrong with 1983. It was a good year, really…thirty years ago. And I didn’t spend all that money and all that time and stress and craziness for 1983. You can see it in the photos if you look hard. The grout is kind of orangy, a bit darker than the tiles themselves. It’s not a big thing, not really, but I couldn’t look away. After a few days that ivory grout became the biggest thing in my kitchen, like it had grown into a massive, stressful, kitchen-eating monster.

I know, I know. First World Problem. And here’s me having dreamed of a new kitchen for so long, and there are so many GOOD things, like a dishwasher in the kitchen, a tap that works properly, oodles of storage, you know? But I hated the grout.

By Friday morning I’d made up my mind. I, who’ve been taught well not to make a fuss and to be grateful for what I have rather than complain about what I don’t have, I called the kitchen people and told them…TOLD them, mind you…to fix it. Felt like a naughty kid testing the boundaries and stomping off to my room in a tantrum. Told them.

They fixed it that day. 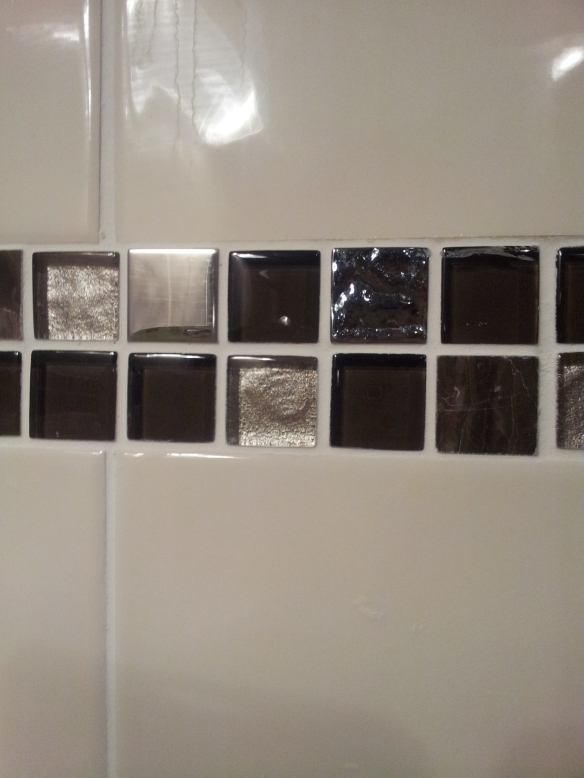 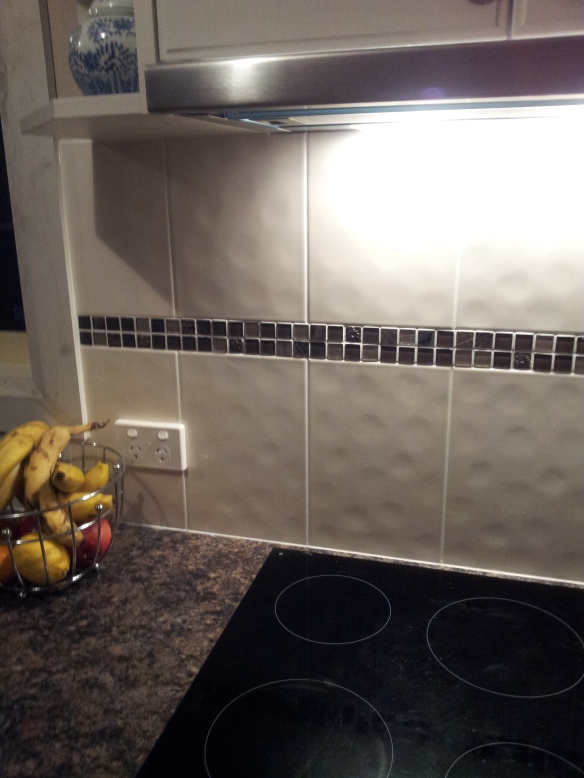 I walked into the kitchen on Friday afternoon and saw that new grout, and the mess the disgruntled tilers had left, and just like that a weight lifted off me. It was good.

I know, the stress of the wrong-coloured grout was wildly exacerbated by the craziness of home-upheaval and the worry about the missing (and recently discovered) cat. It certainly hadn’t been an easy week. But in that small moment I realised a good lesson: just as it wasn’t the tiles that were wrong – I’d chosen them carefully – it was the grout, sometimes in life it’s not the big things (like a marriage or a job, for instance) that are wrong, but the little tiny stuff around them, the stuff that’s easily changed. It takes wisdom to see it.

Making that phone call and getting them to change the grout was worth it.

16 thoughts on “When context is everything”